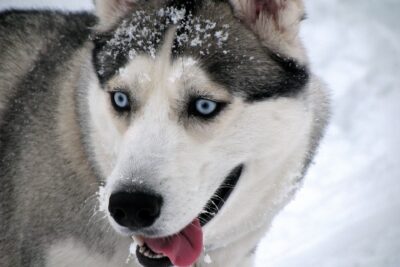 Siberian Husky is valued for its tenacity, dedication and work in cold conditions. And probably everyone admires the Husky’s azure blue eyes.  What causes their blue color?

Genetic scientists have answered the question. They were able to find a genetic variant on chromosome chr.18 that is linked to the blue eye colour in Siberian Husky. The analysis was carried out by comparing the DNA of 6,000 dogs, including a set of blue-eyed breeds such as Siberian Husky and Australian Shepherd. Using molecular genetic methods, they identified a duplication of DNA sequence upstream of the ALX4 gene, which plays an important role in mammalian eye development. And they published their work in the prestigious journal PLOS Genetics.

The work is an example of the research in which dog breeders have also participated, willingly sending DNA samples and photographs of their dogs’ eyes. Without them, the study and analysis could not have been completed.

At the World Dog Show in Brno we found that blue-eyed huskies were in a distinct minority at the show and discussions with professional breeders revealed that they preferred dark eyes or just didn’t care about colour. Dark brown eyes are almond shaped in Siberian Huskies as they blend in with the coat colour around the eyes, while blue eyes are distinctly round due to their light blue colour.

However, breeders have confirmed that blue-eyed huskies are popular among ordinary breeders, and people ask for blue eye colour on purpose in Huskies. Interestingly, Siberian Huskies are born with blue eyes, which either darken or remain blue in the first few months of their lives. Typical for this breed is also heterochromia, i.e. different eye colour in one individual. Yes, Huskies often have one eye blue, the other green or completely dark.

The question is whether breeders would appreciate a genetic test that could reveal the genetic basis of eye colour by testing for the described genetic duplication upstream of the ALX4 gene. Do you think so? Write to us.

Siberian Huskies are susceptible to a number of genetic eye diseases. Many people believe that blue-eyed huskies are more likely to develop these problems than their brown-eyed siblings, but this is not the case. Genetic eye diseases are the result of a defect in other genes that affect the development and function of the eye.

The most common include:

X chromosome-linked progressive retinal atrophy (XLPRA1) is an inherited eye disease affecting Siberian Husky dogs. XLPRA1 results from degeneration of the photoreceptor cells of the retina, which are important for vision in dim or bright light. Males are affected more often than females.

Retinal cone degeneration (also Achromatopsia) is a disease characterized by loss of cone photoreceptor function resulting in daytime blindness, complete color blindness and reduced central visual acuity. The cause of this disease is a deletion involving several genes, including the key gene CNGB3. This disease mainly affects breeds of Arctic lineage such as the Siberian Husky or the Alaskan Malamute.

Glaucoma in Siberian Huskies is a newly described genetic disease that leads to irreversible loss of vision. Unfortunately, its nature is not yet known. However, a study is underway to identify the mutation (or mutations) in the DNA that causes glaucoma and subsequently develop a genetic test for this disease in this breed and possibly other affected breeds. As there is currently no effective treatment for glaucoma, testing would provide an invaluable tool in the fight against the disease.