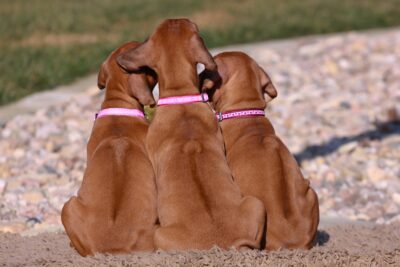 We would like to inform you about news in ridge genetics in Rhodesian Ridgebacks.

Based on testing of hundreds of samples and valuable feedback from breeders, we discovered that ridge genetics in Rhodesian ridgebacks is not purely under the control of one gene – the ridge gene. When testing we observed that heterozygotes (R/r) – Ridgebacks possessing only one ridge gene – might be ridgeless! We suggest that the ridge gene is suppressed and ridge is not formed. This phenomenon has been observed quite rarely and according to our data and estimates, approximatelly 95% of heterozygotes have a ridge on the back. All dominant homozygotes (R/R) always form ridge according to our data. Our genetic test will test copy of ridge gene with 99% accuracy. However, at the moment, it is not possible to exactly determine if heterozygotes (R/r) born in a litter will have ridge or rarely ridge formation will be suppressed.

We took part in Rhodesina Ridgeback World Congres in Lund 2016, where Dr. Hornak had a lecture about ridge genetics and discovery of suppressed ridge gene. This finding was confirmed by breeders based on their experience.

Despite this observation, our genetic test is very accurate tool to predict the occurrence of ridgeless puppies in Rhodesian ridgebacks.

We will keep you informed about further news in ridge genetics.