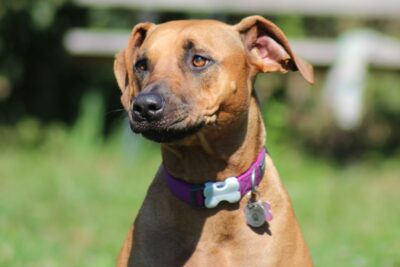 we have newly introduced a genetic test for early hearing loss in the Rhodesian Ridgeback breed.

For many breeders the disease is known as EOAD (Early Onset Adult Deafness). It is a genetic disease that is characterised by hearing loss early in life, in which affected individuals lose their sense of hearing within 1-2 years after birth. The inheritance is recessive, the affected individual is the offspring of a sire and a dam who are both carriers of the disease. Carriers do not suffer from hearing impairment or deafness.

Initially, the test could have been ordered from an American laboratory within the ProjectDog project. Unfortunately, the laboratory has stopped accepting samples for testing for this disease.

The mutation was identified in the EPS8L2 gene, a gene that causes hearing loss in humans when it is dysfunctional. Link to original publication describing mutation in Rhodesian Ridgebacks:

Early onset of adult deafness in the Rhodesian Ridgeback is associated with in-frame deletion in the EPS8L2 gene.

You can also order a genetic test from archived DNA (for the samples sent in 2019 and later). Link to the EOAD genetic test.