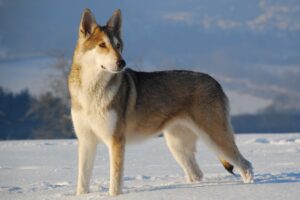 Mr. Saarloos started breeding these wolfdogs in the first half of the 20th century by mating a German Shepherd with a female wolf from the zoo in Rotterdam, the Netherlands. The Saarloos Wolfdog is a sociable dog and can be a great partner. He is devoted to his owner and shows his love by close contact with humans. On the other hand, the Saarloos is more of an introvert and his stubbornness must be taken into account. He needs a lot of repetition when learning, but you can definitely teach him the basic commands through positive motivation.

The L locus affects the length of the hair coat of dogs due to a DNA variant in the FGF5 gene...

Pituitary dwarfism (also called nanism) is a disease that leads to a dwarf growth of dogs and is caused by degeneration of the pituitary gland with a consequent lack of production of growth hormones...