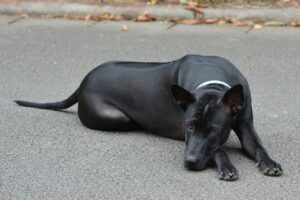 The Thai Ridgeback is a muscular, medium-sized dog with a graceful. It is a nimble and natural athlete originating from Thailand. Ridge on the back is formed by hair growing in the opposite direction. Coat coloration includes solid blue, black, red, or fawn with a black mask occasionally seen in dogs with red coats. Thai Ridgebacks also have spotted tongues. Today, most Ridgebacks are companion dogs, but they still retain many of the same instincts for the jobs they were bred for: hunting and guarding.

The ridge formation in Rhodesian and Thai Ridgeback is caused by mutation (duplication of stretch of DNA sequence including several genes). The mutation is called simply a ridge gene and shows dominant inheritance.