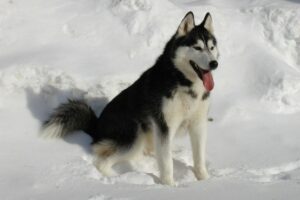 The Siberian Husky's graceful, medium-sized, almond-shaped eyes can be brown or blue, sometimes with varying colours. Siberian Huskies have quick and agile legs and are known for their powerful but seemingly light gait. They weigh no more than 30 kg and are much smaller and lighter than their burly relative, the Alaskan Malamute. As natural pack dogs, they enjoy family life and get along well with other dogs. Due to their innate friendliness, they are not ideal watchdogs. They are energetic dogs that cannot resist chasing small animals, so a safe running room is a must.